We live in a barn in the Midlands, on a ridge between Stratford-on-Avon and Worcester. There was no planting here when we moved in, and Jane has worked tirelessly to transform it into a much admired garden.

One problem that we have gardening here is that we are surrounded by fields. It sounds idyllic, and it probably would be, if those who own the fields on either side actually did something with them. Actually, they do - they grow weeds. The strong wind (we live on the side of a hill) means that our garden gets vastly more than its fair share of weed seeds, and they seem to be ecstatically happy about the prospect of growing. 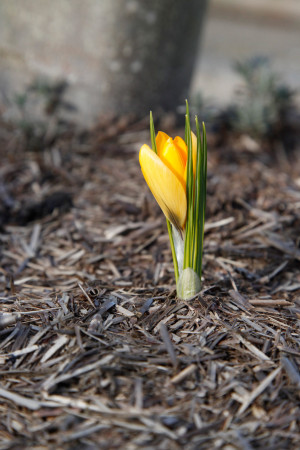 Pretty much the only way to tackle this problem is the use of a mulch - reasonably thick so that the weed seeds are unable to reach the ground underneath and germinate (and are deprived of light if thy do). When we first arrived we had a fairly unlimited supply of cow manure from a nearby farm which, when rotted down, was quite effective, and also improves the soil, but when the farm decided that dairy was no longer viable our source of supply dried up.

We looked around for something suitable and Jan found ‘Strulch’. We decided to order some and give it a try. I must admit, I was a little sceptical about one aspect of this stuff in particular. Living near the top of a ridge the wind varies from strong to horrendous (it only stops blowing a gale when people visiting stand and say ‘Oh what a lovely view’, not knowing the downside). The reason for my scepticism is that ‘Strulch’ is relatively light and fluffy, and I rather wondered whether most of it with end up someway down the road. In fact, this is proved not to be the case. What happens is that when it rains (also not an infrequent event!) the newly spread Strulch’ begins to mat together, a sort of ‘felting’ process, and the wind has far less effect than I feared it would.

A fresh pallet (50 bags) is now in residence near the garage, and the pile of bags on it is diminishing steadily. This is our second year using it, and I think it is fairly clear that the experiment has been a success.